Sapphires have been valued by numerous civilizations for countless millennia, and to this day sapphires continue to be highly desirable gemstones. A unique variety of sapphire exists which stands apart from the faceted gemstones that are commonly cut from sapphire crystals: this variety is known as “star sapphire”. This form of gem corundum is distinct in that it displays the optical phenomenon known as “asterism” which causes the sapphire to appear as though a star or asterisk of reflected light is moving across the surface of the stone as the angle of reflection changes. Asterism itself is in actuality a complex form of “chatoyancy”, an optical phenomenon that is exhibited by many gemstone materials but is most commonly associated with “cat’s eye” gems which show a single moving band of light on the stone’s surface due to tightly packed reflective inclusions that are arranged parallel to one another within the stone. In the case of gemstones which display asterism, multiple axes of chatoyancy intersect to produce the stellate reflection for which these gems are known. For star sapphires, asterism occurs due to a high density and proper arrangement of the “silk” inclusions which are common in corundum crystals. These inclusions typically form through a process called “exsolution” whereby impurities present in the fluid from which a material is crystalizing begin to nucleate in spaces interspersed within the growing mineral lattice and become solid crystals themselves. During the formation of a star sapphire, the silk inclusions grow in a crystallographically oriented manner, aligning along the structural axes of the surrounding corundum. Most commonly three different axes of chatoyancy are formed in such stones, resulting in a flash with the shape of a 6-ray star when light is reflected by these inclusions in the correct manner. Unlike the transparent sapphires which are commonly cut as faceted gemstones, star sapphires are exclusively cut as cabochons in order to display their asterism properly as the curved surface of a cabochon accentuates and sharpens the chatoyant bands of light reflected from within the stone in a way that a flat surfaced gem cannot achieve. The sharpness of a star sapphire’s asterism is thus determined by its cut as well as both the size and spacing of its silk inclusions. 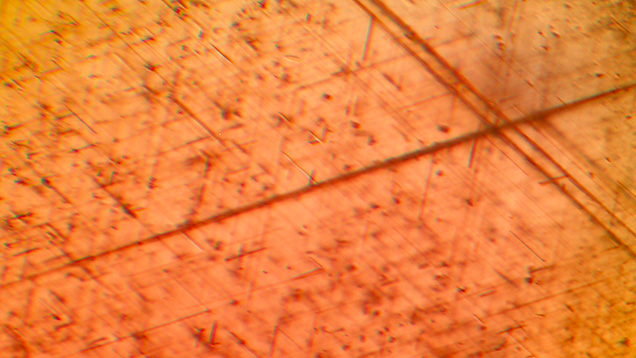 A web of crystallographically oriented rutile silk in a sapphire crystal from Myanmar; Image: Gemological Institute of America

For many star sapphires, the inclusions which are involved in their namesake phenomenon are inclusions of the mineral rutile (TiO2). These fine needles of rutile typically reflect light in a way that gives the sapphire’s star a white or silvery appearance. Asterism of this nature may also be seen in “star rubies”, although the need for quadrivalent titanium (Ti4+) to be present in order to allow for the formation of sufficient rutile silk frequently lends purplish hues to these stones, due to the blue chromophoric properties of quadrivalent titanium in corundum crystals, which may otherwise be unideal for gems described as “ruby”. Rutile is not the only inclusion that can cause corundum to display asterism: iron bearing inclusions of ilmenite (FeTiO3) and hematite (Fe2O3) are also known to cause asterism in sapphire gems. Unlike rutile-associated asterism, the flash of star sapphires which contain ilmenite and/or hematite inclusions is usually of a golden or bronze colour rather than white or silver, and when present in high enough density these inclusions can also darken the apparent body colour of a sapphire with the potential to add opacity to such stones. Black star sapphire is the best example of this variation, showing a gold star over a black, or nearly black, body colour. If both rutile and iron-bearing inclusions are present within a single stone the stars they produce will overlap, but these stars will be rotated at 30° angles from one another and cause the gem’s flash to appear as a 12-ray star composed of six golden rays and six silvery rays due to differences in how these two groups of inclusions exsolve during the crystal’s formation; rutile exsolves in line with the geometry of corundum’s second-order hexagonal prism, while ilmenite and hematite exsolve in line with the geometry of corundum’s first-order hexagonal prism. It is also possible for a corundum crystal with only one type of inclusion to show a 12-ray star due to lamellar twinning along its c-axis, causing two individual sets of the same exsolved mineral to form at different angles. 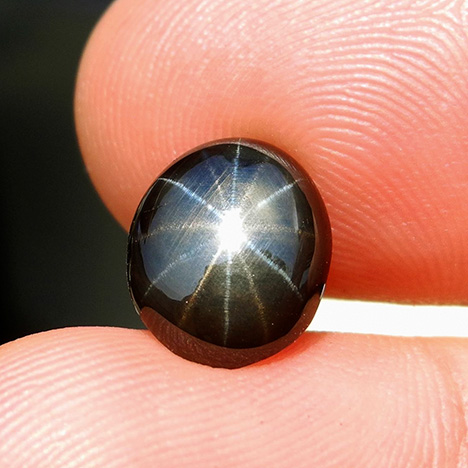 A black star sapphire from Thailand, showing a two-toned 12-ray star due to the presence of both rutile and iron-bearing inclusions; Image: Gemological Institute of America

As is the case for sapphires which lack asterism, star sapphires are sometimes subjected to treatments to enhance their colour, including heat treatment and diffusion treatment. Nevertheless, the asterism which is exhibited by these corundum crystals is the real star of the show. A timeless gemstone that has a depth of character not often seen in other stones, star sapphire is truly a stellar form of gem corundum.