The Allure of Aquamarine, part 2 - Legends and Lore

Aquamarine has a long history as a revered gemstone. Blue and colourless beryls are thought to have been known to the Sumerians and Semitic peoples of antiquity, although definitive evidence of this within ancient documentation has been lost in translation. What is more certain is that aquamarine was known to the ancient Greeks come the 3rd century B.C.E., but their use of the stone likely began much earlier in history. During this era aquamarine and colourless beryl were known as “beryllios” in ancient Greece, a term from which the contemporary name for the mineral beryl was derived. To the Greeks, the sea-coloured beryl was a stone which held the power to protect those aboard ships and ward off stormy waters, beliefs which quickly led to the gem’s association with Poseidon, the god of the sea. Those who thought the stone’s power had the potential to dwindle would sometimes soak crystals in water for extended periods of time, believing that this would restore the blue beryl’s abilities. 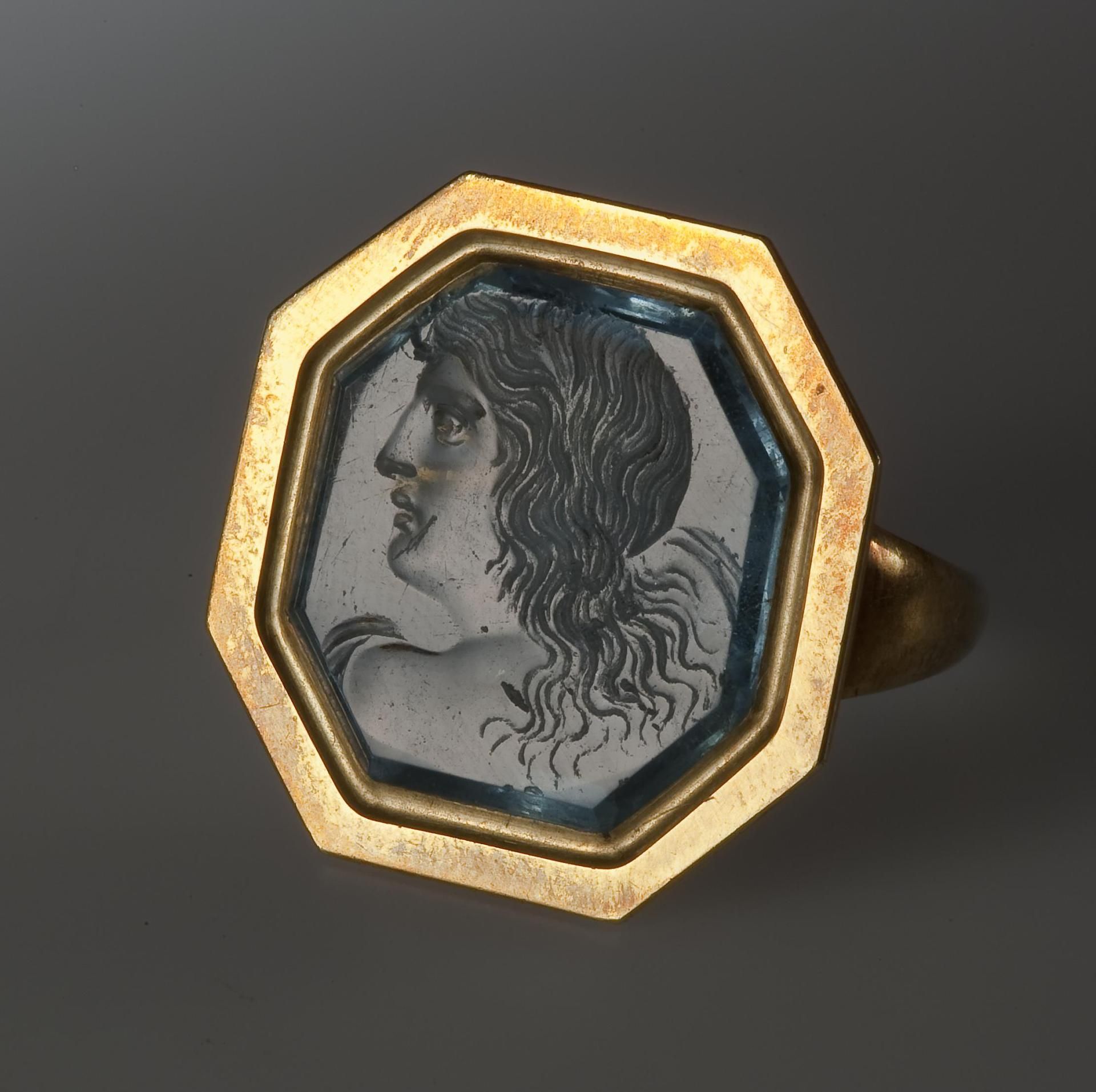 An ancient Greek intaglio of the nymph Galene carved into aquamarine from the 3rd century B.C.E. mounted in a reproduced gold setting; Image: The State Hermitage Museum

As many elements of Greek culture were adopted by ancient Romans, so too was the infatuation with aquamarine and its alleged abilities. The Roman philosopher Pliny the Elder wrote about aquamarine in the 1st century C.E., saying that it seemed “to have come from some mermaid’s treasure house”. In the 2nd century C.E., the writer Damigeron described the healing properties associated with aquamarine and dozen of other stones in his book “de Virtutibus Lapidum” (English: “The Virtues of Stones”); the book suggests that among aquamarine’s many applications, purity, fertility and, harmony were all traits which the stone encouraged, even so much so that it could be used to purify water. In ancient Rome, frogs were also considered to be symbols of harmony, and as such aquamarine became tied to symbolic practices which surrounded frogs; sources suggest that ancient Romans believed conflicts could be dissolved between two people or groups if one gifted an aquamarine frog carving to the other, or if they shared water with one another from with an aquamarine goblet which had been inscribed with the image of a frog. Roman mariners who appreciated the stone’s colour and lore were responsible for imparting the name “aquamarina”, a direct reference to seawater which lives on to this day. 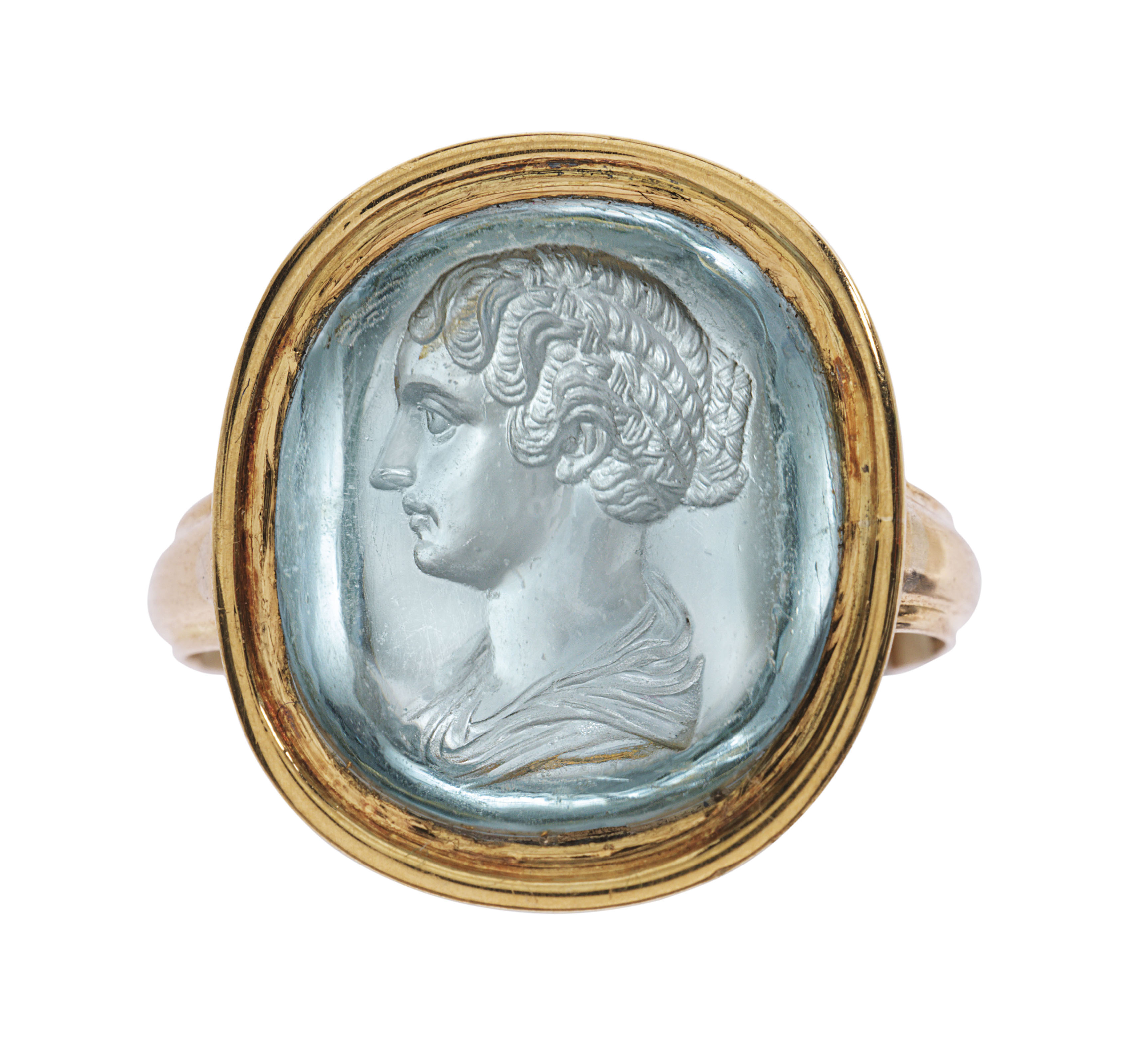 By the time the Romans had been made aware of aquamarine, the stone had also made its way to ancient Egypt, likely as a result of Egypt’s interactions with Greece and Rome. it is possible that interactions between Egyptians and Israelites of this era would have made the peoples of the Levant aware of aquamarine as well if they had not encountered the stone earlier in history. In ancient Egypt, where certain colours were considered to carry spiritual significance, a comparison was drawn between the colour of aquamarine and the colour of turquoise. For the ancient Egyptians, turquoise and its blue-green colour were regarded as symbols of happiness and were thought to have a connection to the sea; thus, aquamarine also became associated with these meanings in Egypt. The stone was additionally thought to provide protection for warriors and encourage victory in battle, a belief that carried over into Medieval Europe. During the late middle ages aquamarine was not only valued by soldiers, the stone also drew the attention of European rulers who sought to take advantage of the healing powers ascribed to aquamarine by the Romans. The writer Damigeron was referenced by William Langland in his 1377 work “The Vision Concerning Piers the Plowman” where he posited that aquamarine had the ability to protect one from the effects of poison. Consequently, monarchs and aristocrats were attracted to aquamarine for use as a protective amulet or talisman due to the ever constant risk of assasianation which many of them faced. This made aquamarine jewellery a more common item among Medieval Europe’s ruling class, with the gem frequently finding itself set into crowns and diadems. Aquamarine was used not only for healing during this period but also for divination. Some sources suggest that on occasion aquamarine crystals were suspended over a bowl of water which was rimmed with letters of the alphabet, and that movement of the stone towards various letters would illuminate answers to the user’s questions in a manner comparable to a contemporary ouija board. It was also thought that one could cast a piece of aquamarine into a container of water and gain insights by reading the resulting distortions on the water’s surface. Crystal balls were a popular divination tool at this time as well, and aquamarine was considered to be one of the best materials for crafting such items. Of course Christianity had spread forth from Italy by this point, and the Christians found there own symbolic meaning for aquamarine; as St. Thomas was said to have travelled the Mediterranean preaching gospel, aquamarine became the gemstone which was most closely associated with him. Aquamarine continued to be a desirable gemstone through the renaissance and up until today, now being recognized as one of the official contemporary Western birthstones for the month of March. Its attractive lustre, soothing colour, and timeless elegance make aquamarine a wonderful choice for use in bespoke gemstone jewellery, with the stone’s hardness providing a great deal of design versatility and allowing it to be featured in virtually any jewellery piece. An important part of gemstone history and modern design, aquamarine will always be one of the many gems which can quench one’s thirst for natural beauty.